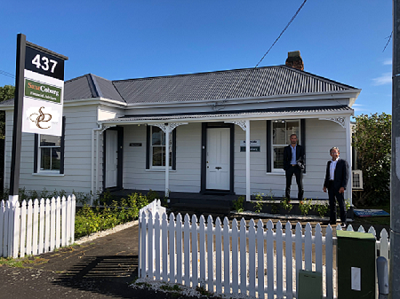 Saxe-Coburg was founded in 1991 by Mark Houghton to offer an impartial, client-centred service.  Mark is the CIO and is authorised to provide financial advice services to both wholesale and retail clients.

From its inception, our service has been delivered as a discretionary investment management service, with each portfolio tailored to clients' unique aims and objectives.

Our business model enables us to access both wholesale and retail investment opportunities.

Mark has a background in Maths and Economics and spent 8 years as a secondary school teacher before leaving in 1987 to pursue a career in finance.  In the three years prior to setting up Saxe Coburg, Mark grew his business under Mark Houghton Financial Services and Houghton Burt Limited.  This became Saxe-Coburg Limited in 1991.

Mark continued to run the business as a sole operator until Sam Brindle joined the firm in 2016.

Our disclosure documents are available on request

Sam joined Saxe-Coburg as a Senior Associate in June 2016.  He has more than 10 years' experience in the financial services industry, predominantly in investment research and analysis.

Originally hailing from the Wairarapa, Sam graduated with a Bachelor of Science and Post Graduate Diploma in Engineering Geology from Canterbury University in 2000 before embarking on a career as a professional geologist in Australia and New Zealand.  In 2002 he moved to the United Kingdom on his OE where he joined WS Atkins as a consulting engineering geologist.

After gaining a Graduate Diploma in Business Studies (Finance) in 2006 from Massey University, Sam joined State Street Global Advisors in London, initially as an investment analyst before later moving into credit analysis.  This led to roles with The Royal Bank of Scotland as a credit analyst and XCAP Securities as an equity analyst before moving to Melbourne in 2013 where he joined Pitcher Partners' financial advisory business as a research analyst.

Sam does not currently hold a licence to provide financial advice, and his main role at Saxe-Coburg Limited is research, including quantitative analysis of investments and client portfolios, academic research on portfolio management and also contributes in the areas of compliance and administration.

If you’d like to keep up to date, join our newsletter subscription below